Clonlara and the Colégio de São José: A Trailblazing Partnership 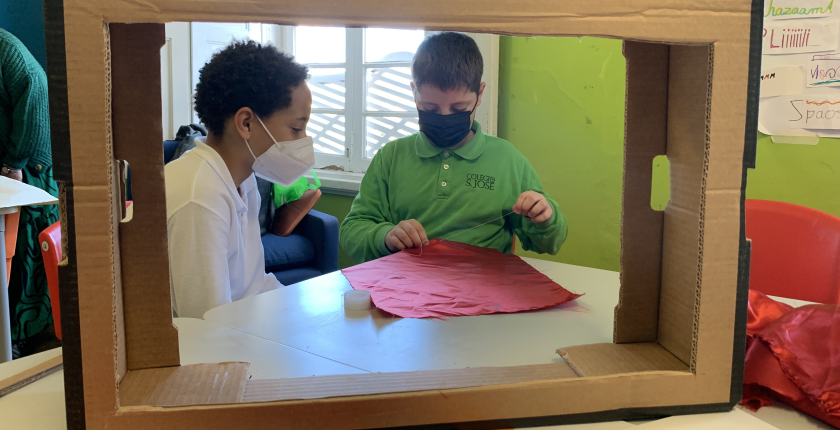 At nearly 100 years old, the Colégio de São José (CSJ) in Coimbra, Portugal, boasts a long history characterized by educational reform and innovation, making its partnership with Clonlara School the perfect match. Since 2018, CSJ has worked to implement Clonlara’s personalized education approach to support K–12 students in both Portuguese and English.

As part of CSJ’s International Program, Clonlara students at CSJ craft individual learning paths based on education standards from the state of Michigan and Portugal. Organized in multiage groups, the students work individually or in small groups, under the supervision of a tutor. When students develop a passionate interest in a topic, teachers guide and encourage them to follow their curiosities.

For 8-year-old Gil, whose teachers and fellow students describe as “brilliant” and “inspirational,” the interest came from a trip to Italy when he was very young. Intrigued by the trip which he did not remember, he told his teachers he wanted to learn more about the country.

As he studied, Gil discovered famous landmarks, read Romeo and Juliet, and stumbled upon the renowned work of Leonardo da Vinci. Through his research, he learned about a da Vinci showcase in Coimbra, and he invited all the Clonlara students to attend the exhibit with him. The day after the field trip, Clonlara learners of every age decided to build 3-D polyhedron models!

As Gil, who had been described as “disruptive” and “disrespectful” at his previous school, followed his interests, he employed and integrated many academic skills such as language arts, math (including geometry and calculus), art, geography, and more. Especially exciting was the enthusiasm Gil inspired in others!

“All he needed was for his ideas to be heard; he needed an opportunity to bring out everything he has,” says Joana Ladeiro, Clonlara program coordinator and teacher at CSJ. “Not only is it a success that he fits in here when he couldn’t fit in at other schools, but here, he inspires other kids!”

CSJ first opened in Coimbra’s poorest neighborhood in 1922 as an unconventional project of local Dominican nuns concerned for little girls in the area who had no access to “normal” school. Soon esteemed for its quality of education, the school began taking in daughters of immigrants from colonies in South America, Africa, and India.

In 1960, CSJ began accepting boys and slowly settled into a rigorous traditional teaching model that endured until Isabel Valente Pires, an innovative new director, began asking the teaching staff to reflect on what it is that a school should offer students in the 21st century. Under Isabel’s leadership, her team decided they wanted CSJ to become a global school that would offer quality teaching, provide an emotionally supportive environment, and emphasize the development of social awareness and responsibility for others.

To make their educational dream come true, the teachers decided to employ more creative teaching methods and began organizing their school days differently. With their students, they discussed not only subjects listed in the standard course of study but also topics the students were interested in learning. They negotiated how learning would be facilitated as well as the duration of each unit of study. Settling on two-week time periods with no homework, the teachers mentored student-driven project work and agreed not to teach students anything they could learn on their own.

The CSJ team’s desire to provide an environment for learners to follow their own interests in a globally focused, emotionally supportive community aligns well with Clonlara’s mission to transform education on a global scale, through a highly personalized approach that fosters authenticity, autonomy, and joy in the learning process.

Throughout its history, CSJ has reflected and evaluated how best to serve its students and families within the boundaries set in place by Portugal’s more traditional course of study. To expand its curriculum, CSJ looked to Clonlara to offer its students a tailored educational plan where they could delve deeper into topics while taking part in a collaborative learning community both inside and outside the school’s walls. The partnership accomplishes this goal by both broadening learners’ scope of study and giving teachers a framework for personalizing students’ individual learning journeys.

“Colégio de São José is an excellent, well-respected school,” says Clonlara School Global Research and Development Director Sofia Gallis.” I am proud of our affiliation with CSJ. Our partnership provides an opportunity for the school to go beyond its curricular limits to follow student learning paths wherever they may lead.”

From Vision to Reality

Clonlara Founder Pat Montgomery believed students could identify their goals and passions, and, with the guidance and support of Clonlara’s knowledgeable teachers and advisors, choose their own educational resources and establish their own schedules. Her vision has become a reality in Michigan, throughout the United States, and around the world—including at CSJ in Coimbra, Portugal.

“During teacher training, they tell you that the secret for successful learning is motivation and curiosity, and it is totally true. Any student can stand out if they’re doing what they love,” says Joana. “Our partnership with Clonlara has helped us make our vision for education a reality!”

Inspired by the Clonlara/CSJ partnership? What questions do you have about the program?