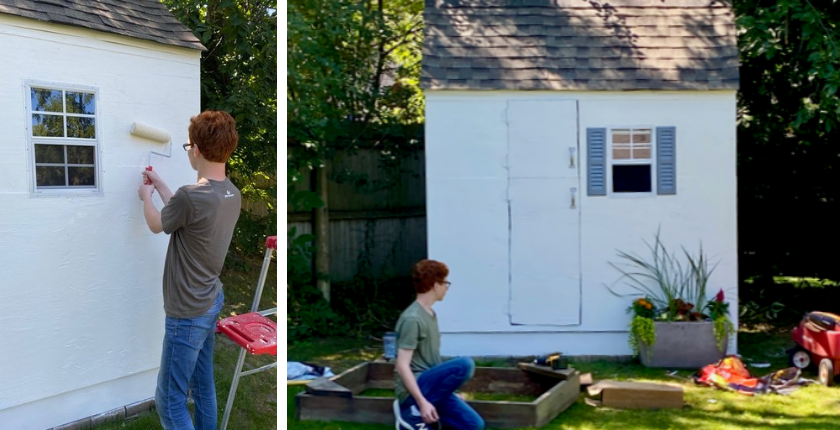 When a Clonlara School Off-Campus Program parent followed her 12-year-old son’s interests, she almost ended up with a giant caboose in her backyard!

Thankfully, constructing a private “thinking place”— no matter what its design—was the inspiration behind her son William’s project, and he was willing to settle on building a smaller playhouse-sized version of their house. As William explains, “I wanted a space away from others where my thoughts wouldn’t get interrupted.”

Begin with a Question

For some, the most difficult part of employing Clonlara’s Full Circle Learning (FCL) Model is deciding where to begin. Parents may be tempted to assign what they think will be an “enjoyable” topic of study rather than guiding students through the personal (and sometimes laborious) process of discovering their own meaningful subjects to research.

William’s mom, Amy, started by simply asking her son, “What do you want to learn?” Because they have a playroom full of Legos, it was not a surprise when William answered, “I want to build like Legos, but on a larger scale.”

As her son began to think seriously about erecting an actual inhabitable structure in their backyard, she followed up by asking, “What questions do you want (need) to answer?” In response, William realized he had a lot of questions he needed to answer in order to make his project happen. Here are just a few:


Strategic questions asked by parents or teachers can do wonders in sparking student imagination! But what if you can’t answer a student’s questions or assist them practically in the completion of their learning project?

When your child’s questions lead you to unfamiliar terrain, it’s helpful to find someone who can help navigate the way. In William’s case, neither his mother nor his father possesses construction skills or building experience, but they found a mentor (or rather a mentor found them) at the local lumber supply store.

Amy was describing their building project to a store employee and mentioned how William’s learning style included strategies for coping with severe dyslexia and ADHD. A man standing nearby overheard their conversation and shared that he, too, struggled with dyslexia in school.

When he learned the specifics of William’s project, he walked with them through the store showing William which products to purchase for the roof and helping them load the materials into their cart. He even transported the items to their house and modeled for William how to properly shingle a roof! Furthermore, he assured William that if he needed help, he would send one of his employees (he owns a construction company) to help William build.

Familiar with and even trained in the idea of following the lead of a child, Amy still experienced a few hesitant moments throughout the FCL process of William’s building project. What if their new mentor ended up not delivering on his promises to offer help if needed? What if, after investing in the expensive materials, William decided not to complete the project?

Amy acknowledged these questions as legitimate concerns, but in the end, she decided to trust her son as a learner. William concurs saying, “It’s important that you [the student] are really interested in the project before you start. [Parents], let your children come up with the ideas and then follow their imaginations.”

In the end, Amy committed to following her son’s lead, admitting, “I went with it because he went with it.”

Expect Difficulties and Push Through the Problems

Even though it was William’s idea to build a playhouse, and even though he drove the entire process, Amy shared that there were still days when William just “didn’t want to deal. When he was like, ‘I’m mad. This is frustrating. The wall just fell on my head. I don’t want to do it.’” In those cases, he learned to walk away and take a break, which, in Amy’s words, “was huge!”

Upon reflection, William admits the project ended up being much bigger than he envisioned and taking much longer than he wanted or expected. Even so, he says, “I pushed through to the end because I wanted it to be finished.”

When facing problems, William knew his mother wouldn’t bail him out. “[She] knew the answer,” he said, “but [she] made me figure it out.”

Amy certainly celebrates William’s accomplishment of building his “thinking place,” but even more, she delights in the development of his persevering spirit and problem-solving prowess.

As students gain more experience with Full Circle Learning, they begin to use the concepts intuitively. After building a playhouse, William went on to complete an extensive model train layout, build three-quarters scale arcade machines, and construct full desktop PCs all the while employing—organically and on his own—elements of FCL to his process.

The more students practice FCL, the more self-directed and comfortable they become in their learning journey. Perhaps Amy says it best: “William’s ‘thinking place’ helped him develop as a reader, writer, mathematician, explorer, creator, designer, engineer, and most of all a happy, successful, confident student who loves to learn.”

Ultimately, isn’t that our goal for every child?

We would love to hear your experience with Full Circle Learning! What was your student’s favorite FCL project?